This blog post describes a technique that has now been deprecated in favour of native EKS pod authorisation using IAM backed service accounts.

See our new blog post for details on how to set that up using just a CloudFormation template: Configuring EKS for IAM (OIDC) using CloudFormation

Applying IAM roles to pods in a running Kubernetes cluster has always been a tricky problem. The good people at uswitch have created Kiam, which can ensure that your pods run with only the permissions they need.

This blog post comes with a single command script that will deploy you a working implementation of kiam. You can then apply what you’ve learnt to your own clusters.

Before we get started down the kiam road, it is important to understand the concepts behind it. This is a high level overview, and you should read their documentation to fully understand it before putting it into production.

The diagram below shows how an EC2 instance in an EKS cluster delegates permissions to pods without kiam. 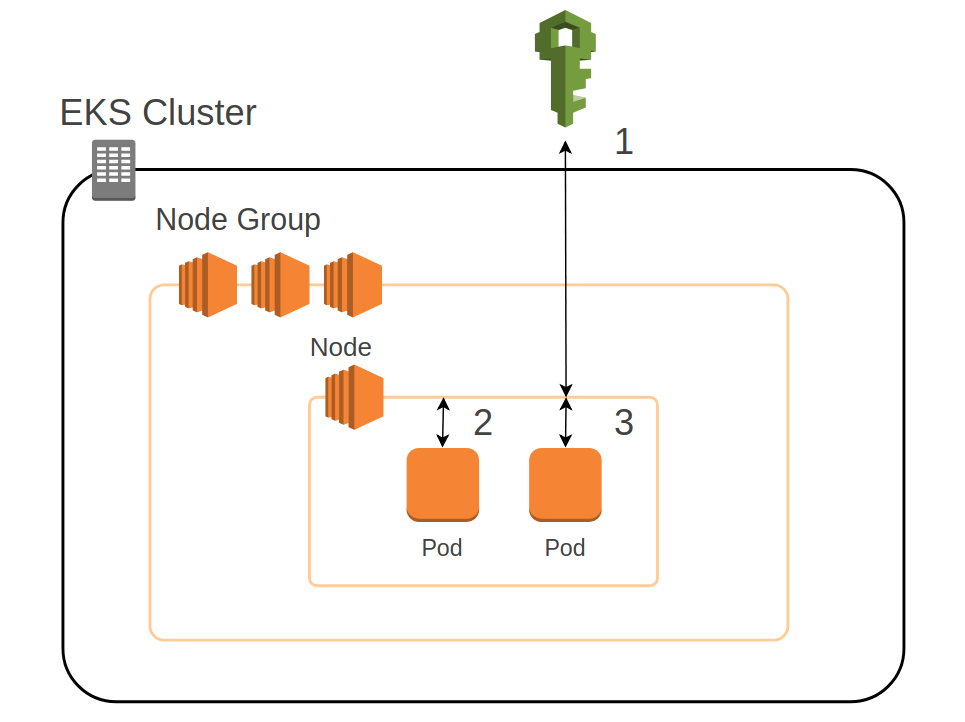 Tools like kiam and kube2iam work by intercepting the metadata service credentials lookup with a proxy service, assuming the requested role, obtaining the credentials, and passing them back to the pod. Thus individual pods on the same EC2 instance can have different roles. These credentials look just like the classic AccessKey and SecretKey you are familiar with, except that they are timebound, and must be refreshed periodically.

Since these proxies must be able to assume all possible pod roles, kiam prefers the fail-safe methodology of splitting the proxy into two services. The interceptor is the kiam-agent, which runs on the same nodes as the worker pods. The credentials requestor is the the kiam-server, which runs on different EC2 instances to the main worker nodes.

It may seem unusual to see one Kubernetes cluster running two worker node groups, but this is a perfectly valid scenario. It is sometimes used to run specialist nodes, for example those with GPUs, in a separate group to more “general” nodes. In our case, it is necessary to ensure that the nodes running the business logic pods have no IAM permissions beyond that required to join the cluster.

This example creates everything from the VPC and EKS to the helm install of kiam. The repository can be found here: https://github.com/bambooengineering/example-eks-helm-kiam

In the repository there is a single script that will:

The resulting cluster will be minimal working example of Kiam on EKS using CloudFormation.

What is this script actually doing?

Installing kiam is not as simple as just applying one helm chart. Some additional configuration is required to make everything play well together. The script performs a number of tasks:

The proof of the pudding

We can now prove Kiam is configured correctly by running commands from inside the example business logic pod, and check that it has the roles expected of it.

We’re a long way from Kansas

By now you should have a fully functioning cluster with kiam configured and authorising your pods. You can now apply what you’ve learnt to your own cluster.

Note, though, configuring kiam is not trivial, and the smallest misalignment of settings can lead to pods being unable to assume any roles at all.

There are other ways to configure kiam, but with this method (using two node groups), some key points to remember are:

A note on certificates

The script in the repo that accompanies this post generates the kiam secrets on the fly using the kiam-secrets chart (also in the repo). If you change the release of that chart, those secrets will be rotated, and you will have to restart all your kiam-agent and kiam-server pods.

To avoid this, you can generate your secrets in advance, or use a tool like cert-manager. The kiam documentation has some guidance on doing this.

Once you’ve successfully authorised your pods, you can move onto the next steps in producing a production-grade Kubernetes cluster, such as improving helm security. This example uses a bare-bones helm install. You should follow helm’s best practices to secure your installation.

That’s it… Good luck on your Kubernetes journey!